Vegetable Substitutes for Carbs in the HCG & Keto Diets

Vegetable substitutes for carbs in the HCG & Keto Diets such as rice cauliflower, Zucchini and lentil pastas , provide variety and  ensure success. They eliminate all of  high  calories and carbs in rice, pasta, potatoes.  All of these traditional carbs have 200 or more calories and 35 or more carbs per cup. Even 1 portion exceeds the total net carbs for the day. Even whole wheat or whole grain the calories and carbs are still high. Quinoa and black and red beans are not much lower. The portion issue with pasta for most dieters makes it the very worse: 1000 calories and 100 carbs or more!

Swapping in these so-called faux-carb veggies for higher-carb food options can be a helpful tool for managing or losing weight. Michele Smallidge, lecturer and director of the B.S. Exercise Science Program from the School of Health Sciences at the University of New Haven in West Haven, Connecticut, says faux-carb vegetables are “typically lower in calories” and usually are “less carbohydrate dense than typical starchy carbohydrates like wheat-based breads, pastas and other high-carbohydrate dishes.”

The major carbs that need to be eliminated are are quickly digested in the stomach and are absorbed as sugar. Quickly raising the blood sugar they cause rapid release of insulin from the pancreas which converts the sugar into fat. As this occurs, the blood sugar falls and produces hunger. Vegetable substitutes for carbs have almost no absorbable carbs. This is clear seen when comparing “bad carbs-rice, pasta, potatoes” and “good” carbs: 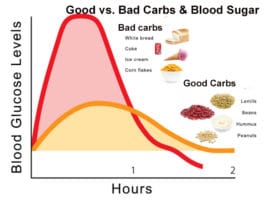 The vegetable substitutes are as low as 25 calories and 1-2 carbs per cup. They are healthy and taste great. Checking for ketosis while eating these foods during phase 2 helps determine if you are making any significant food mistakes.

Vegetable Substitutes for Carbs on the HCG & Keto Diets: The Best Vegetable Pastas

All of these products replace the unhealthy carbs with vegetable sources. 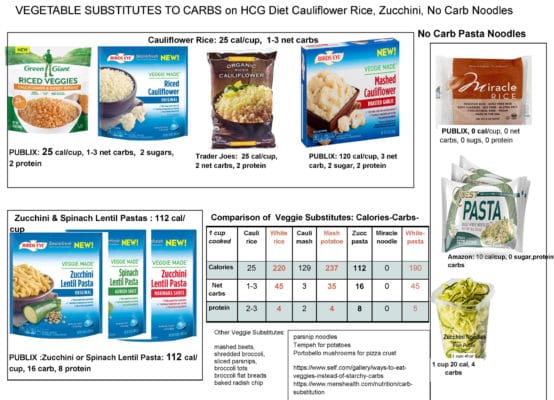 Vegetable Substitutes for Carbs:  Calories and Carbs:  in Rice, Pasta and Potatoes 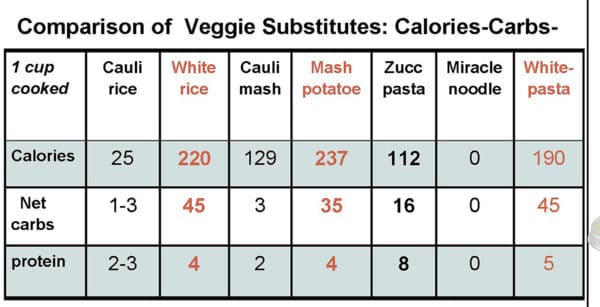 Note in table above the cauliflower rice preparations are about 1/10 of the calories of white or brown rice and less than 10% of the carbs. With net carbs of less than 4 grams they make ideal additions to the HCG diet and like the vegetables are unlimited in volume. The cauliflower mash potatoes and Zucchini pasta are higher in calories and carbs(about 1/2 of the originals) and are very limited on the HCG diet to about 1/2 of a cup. The summer squash is not a good choice with 35 grams of carbs.

These “low carb pasta”  noodles supplied in a translucent plastic bag are translucent, gelatinous Japanese noodles made from the konjac yam. They are almost zero calories and zero sugar and carbs and can be substituted for pasta. Like pasta, the noodles have no taste of their own and can absorb the tastes of sauces and food cooked with them. Since they come already cooked you have no choice as to the hardness. They are purchased in a plastic bag surround by water that has a some what fishy smell even that they are vegan. They needed to be drained and washed well before eating. They go well on the HCG diet or any low carb diet. Shirataki noodles are available in many shapes — spaghetti, fettuccine, macaroni.  Brands of these healthy no-carb pasta replacements  include:

A recent study published in the Annals of Internal Medicine found that a low-carb diet was more effective for losing weight and reducing cardiovascular risks than the low-fat diet.
Preparation must be done carefully, check out this video:

Other Alternatives for Carbs in the HCG Diet

Vegetable substitutes for carbs in the HCG and Keto diets is based on eliminating all major carbs from the diet buying these new substitutes. This not only reduces hunger, but increases metabolism and get keep the total daily net carbs below 25 g for the day.  Dr Simmons’ original 500 calorie HCG diet had no carbs at all except for the few carbs in fruits, vegetables, Grissini sticks and Melba toast. The new 800 calorie HCG diet is based on adding some carbs in form of low carb wraps, bars and shakes. Despite these changes many people find the HCG diet difficult to maintain because of the boredom due to lack of rice, pasta and potatoes.

New low carb diets such as the Paleo Diet and Dunkan diet have encouraged food manufacturers to prepare substitutes for the major carbs. Using vegetables such as cauliflower, zucchini, squash, and beets new frozen an fresh carb substitutes  are available and suitable for the for any dieter that wants to reduce his carbs:

Other Vegetable Alternatives for the Major Carbs in the HCG Diet

There are still more alternative vegetables than can be substitute for rice, pasta and potatoes in a low carb diet such as the 800 calorie HCG diet. Included are: mashed beets, shredded broccoli, sliced parsnips, broccoli tots, broccoli flat breads, baked radish chips and shredded broccoli. Men’s Health outlines even other alternative vegetables that can be eaten instead of rice, pasta or potatoes.

Vegetable Substitute  for Carbs on the 800 Calorie HCG Diet – Recipes


Here are some recipes for cauliflower rice:

Purchase Any of the Products from Amazon.com Prime and Fresh.