When a women’s menstrual periods have stopped for a year or when her blood shows high levels of LH and FSH hormones (LH and FSH are hormones called gonadotropins that are made by the pituitary gland in the middle of the brain) she is said to be in the menopause. Usually this occurs between 45- 55 years, but there is a lot of variation. Often women follow patterns of older female family members. Menopause is associated with many symptoms and problems, for most women the most significant is unintentional weight gain. I will discuss menopause in brief, and then the hormonal reasons for the weight gain and what you can do about it. 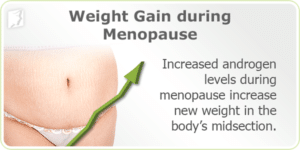 Prior to menopause, a woman’s FSH and LH levels rise and fall each month as eggs are matured and released by her ovaries. The normal aging process effects the ovaries just like every other organ in the body. It’s the normal aging process of the ovaries that is the root of the whole problem. As the ovaries decline in function eggs are not released every month and periods begin to be irregular. This period right before menopause is called the Peri-menopause which may last for years. Women begin to experience hot flashes, night sweats, fatigue, mood changes and weight gain. Gradually the ovaries no longer respond to gonadotropins and ovulation stops.

Estrogen, the female hormone made primarily in the ovaries, begins to decline as ovarian function decreases. This causes skipped periods and failure to ovulate and eventually full menopause. Estrogen is responsible for fat distribution in females: the “pear shape” where most of the fat on the buttocks and thighs rather than the “apple shape” where most of the fat is around the abdomen. Increasing fat distribution around the belly, itself causing serious medical problems, begins in – well ahead of the last menstruation. Estradiol (an estrogen) is responsible for the normal cycle of breaking down fat molecules. With low estradiol levels, fat cells become engorged with more and more fat—the result is weight gain. Along with the fall in estrogen are falls in progesterone, another cause of menopausal symptoms and—weight gain. 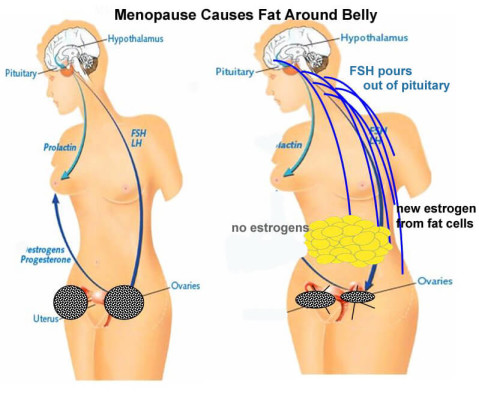 Women’s Body to the Rescue (or I Won’t Give Up the Fight!)

Most womens’ bodies refuse to give into the aging process (or at least for awhile) and all of the hormones made in different glands in the body rush to preserve the status quo.

The pituitary gland attempts to reverse these processes by making more and more FSH and LSH in attempts to get the ovaries functioning again. This causes more and more symptoms and weight gain. The symptoms of hot flashes, anxiety, depression, fatigue and night sweats can be explained by the erratic fluctuations in hormones that occur in these years. Anxiety, sleep problems and the hormones themselves cause—weight gain.

Fat Cells throughout the body enlarge and have the ability to make estrogen and are stimulated to get larger so they can make more estrogen (they are poor producers of estrogen)—the result is weight gain.

Male Androgen hormones: Women and men both have estrogen and androgen- each are held in check by normal body processes. During menopause this whole balance breaks down as estrogen fall, and the effects of androgen increase. What effects? Growth of dark hairs on arms, and face, thinning of hair and most important fat deposition around the abdomen and resulting weight gain.

Testosterone: Again a male hormone, present in females in small quantities. In this case, testosterone made in the ovaries decreases as does estrogen. Since testosterone helps create muscle mass (think of the weight lifters taking these medications illegally) there is fall in muscle mass and a fall in metabolism. (Muscles are more metabolically active than fat cells.) The result a slowing of metabolism and weight gain.

Insulin Resistance: The failure of insulin (hormone produced in the pancreas which regulates blood sugar, principal causes of diabetes) is also associated with menopause.This causes the body to turn as many calories as it can into fat. Eating high carb, high glycemic indeed foods just makes the process easier for the body. The result is weight gain.

All of these hormones, acting together are responsible for the expected and “normal” weight gain and change in body shape so common in menopause. About 93% of menopausal women gain weight between the ages of 35 and 55. This can be as little as 10 lb to as much as 75 lbs or even more.

Giving Up Control: It’s very hard for anyone, female or male to accept that the fact that there are changes going on in their bodies over which they have little control.

Weight gain in Menopause is Natural

The first step to reversing the weight gain associated with menopause is to understand how it happens from a hormonal point of view. Small doses of estrogen replacement from your physician may help with the weight gain. The dose has to be small, since large doses can cause weight gain. HCG remains a positive approach to the problem of menopausal weight gain.

Summary of Menopause and Weight Gain

Maybe you’ve noticed that weight appears to accumulate around your stomach and remain, regardless of your lifestyle. Even hours of work out in a fitness have. Your bones, muscles and to hurt. You experience a of vitality, your work and daily tasks. All of the sudden, you may notice the and symptoms flashes – unanticipated heat spikes that leave you tossing and turning from night sweats.Once you begin to note the signals and symptoms of menopause, you may merely have accepted them as part of the growing old process.

The fact remains, though, you’re not merely getting older – your bodily hormones have dropped out of balance. As you approach menopause, your body loses the capability to control essential hormones – such as estrogen, progesterone and even the male hormone testosterone – all needed for quality performance and optimal health.

Most women do not understand the entire process of menopause. Though the particular term “menopause” is often applied as a blanket statement dealing with all the phases of being menopausal change, the menopause technically isn’t reached until periods have completely stopped for 12 months. The majority of women enter menopause between the ages of 40 and fifty five normally, as their bodies approach the end of fertility and ovulation ceases.

Nevertheless, some females experience earlier menopause as a result of surgical procedures such as complete hysterectomies and total oopherectomies (the removal of the ovaries). Additionally about 1% of females in the United States encounter earlier change of life on setting before the age of 40due to autoimmune problems, cancers treatments, thyroid issues, as well as other health reasons. When you enter menopause, your own ovaries create less and less estrogen. Since estrogen is definitely essential to quite a few life-sustaining functions, the entire body looks for more organs to make necessary estrogen from. Fat cells can manufacture estrogen, so the human body reprograms itself to convert calories into body fat to help improve estrogen levels.

The most unusual characteristic of this menopausal weight gain is the fact that the fat cells all around the stomach and abdomen are the cells that expand. A number of researchers think that hormones such as FSH encourage the fat tissues to make more estrogens which results in more and more enlargement as the ovaries fail.

Previous
Next
Best Buy HCG
51414
When I started the HCG diet, I weighed more than 280 lbs. I weighed so much I could not even use a scale. I work in doctors office in the billing department. It's my first job after high school. The... more »