HCG diet eliminates bad carbs causing hunger and weight gain. Sugars and foods turning to sugar not only  cause hunger, but they also injure blood vessels, the retina of the eye, as well as the nerves in our arms and legs. Not only do the “bad carbs” cause hunger and bodily injury they quickly turn to fat. Since carbs are used for energy before fat and protein, increasing daily activities and metabolism might be a good way to lower blood sugar to normal levels. Unfortunately, it’s almost impossible to change our metabolism enough to make a difference and it’s very difficult to coordinate the timing of blood sugar spikes with physical activity. The only answer is to restrict them as much as possible.

“Bad carbs” are those carbs including sugar and foods that quickly turn to sugar such as soda, rice, pasta, potatoes, donuts, cake, candy and some breads. Here are some of the good vs. bad carbs: 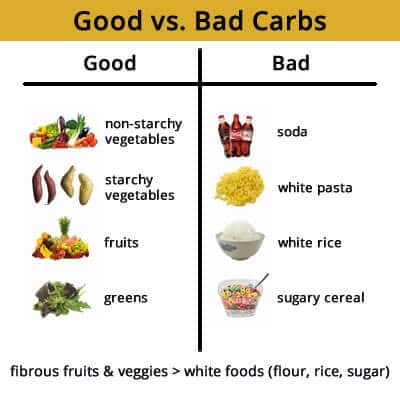 What happens when you eat the “bad carbs”? They behave exactly as if you ate or drank pure sugar. The blood sugar quickly spikes upward which is followed by a spike in insulin. High insulin then turns the sugar into fat. The falling sugar produces hunger and need for more carbs. The carbs create feelings of pleasure and calmness in the brain.

The figure below shows how our bodies handle carbs in much more detail. In this figure, the white ovals represent carbs changed into sugar in the stomach and rapidly absorbed into the blood. The sugar travels to the brain, where it triggers sensations of comfort and pleasure, and to the muscles, where it provides energy. 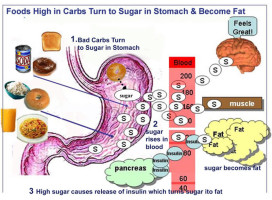 Sugar that is not immediately utilized causes insulin to be released by the pancreas. Insulin lowers the sugar by converting the sugar into fat. Often the pancreas “overreacts” and releases too much insulin. The result is a rapid fall in blood sugar and the resulting hunger and the need for even more food. A vicious cycle of more and more eating and more and more hunger is set off by this mechanism. I hear the same story every day, “My Eating is Out of Control.” All of this happens when blood sugar rises and falls. Falling sugar causes hypoglycemia, fatigue, anxiety, and hunger.

All sugar and all of the rapidly absorbing carbs that quickly turn to sugar and produce hunger and slow metabolism are eliminated from the food intake and replaced with slowly absorbed carbs or vegetable carbs.