HCG hormone burns fat writes Dr Simeons in his HCG diet reports form the 1950’s, The rapid and safe weight loss depends on how HCG  assists in mobilizing fat cells from around the abdomen and trunk as opposed to fat deposited on the buttocks, arms, legs.  Why is this so important from a medical point of view?

Dr Simeons explains these fats and weight loss: “When an obese patient tries to reduce by starving himself, he will first lose his normal fat reserves. When these are exhausted he begins to burn up structural fat, and only as a last resort will the body yield its abnormal reserves, though by that time the patient usually feels so weak and hungry that the diet is abandoned. It is just for this reason that obese patients complain that when they diet they lose the wrong fat. They feel famished “ This may be the major reason for the failure to lose weight on extremely low carb diets.

Dangers of Fat Around Belly and Buttocks

Steroids, growth and sex hormones, genetic factors, and physical activity are all determinants of body composition. In addition, body composition and large artery properties may be influenced by behavioral characteristics such as smoking and alcohol consumption.

Fat Metabolism is Different Between Abdomen and Arms and Legs

Fat metabolism varies depending on whether it is located centrally in the  trunk or in the limbs  Fat cells  from trunk regions are more sensitive to destruction(lipolysis.)  The higher lipolytic activity of the fat cells in the trunk leads to overexposure of the liver to free fatty acids resulting in insulin resistance and hyperinsulinemia.  In addition, fat cells are endocrine organs that produce many peptides, and chemicals with widespread effects on many organs. Regional differences in the secretion of these peptides could thus potentially explain the direct and opposite effects of these fat depots on arterial properties.
As men and women age fat deposits around the abdomen become larger and larger. Decreased testosterone in men and menopause in women contribute to these problems. 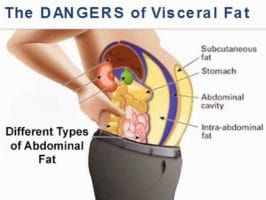 Throughout the years, hCG has been reported to exert its actions on several tissues other than gonadal. Therefore, we are not dealing with a “pure” sex hormone: Several clinical conditions, such as asthma, allergies, gastric ulcers, intermittent claudication of the lower limbs and anemia were treated with hCG, with encouraging results. Available data  indicate that hCG might also improve lipolysis(fat cell destruction) in human adipose tissue, via an inhibitory effect on lipogenesis.(new fat cell production.)
Fleigelman “concluded that the administration of hCG in rats decreased the activity of alfa-glycerophosphate dehydrogenase and glucose-6-phosphate dehydrogenase from the liver and adipose tissue, suggesting a decreased lipogenic activity in both tissues under hCG.”
Yanagihara reported that hCG accelerates “not only the mobilization of fat from fat deposits but also its utilization in peripheral tissues. hCG increased the metabolism of injected fat emulsions, suggesting the acceleration not only of fat oxidation, but also increased ketone production in the liver and its utilization in peripheral tissues.”

Romer reported that “hCG intensifies the metabolism of rat brown adipose tissue. Administration of hCG to humans appears to increase the release of fatty acids that varies with the age of the subject”
Melichar demonstrated that “hCG causes a marked FFA release in newborn infants. In adults, a single dose of hCG caused a marked FFA release by  when compared to placebo-treated subjects.”
The last author attributes some of the report weight loss to this effect on fatty acid release and eventual metabolism.